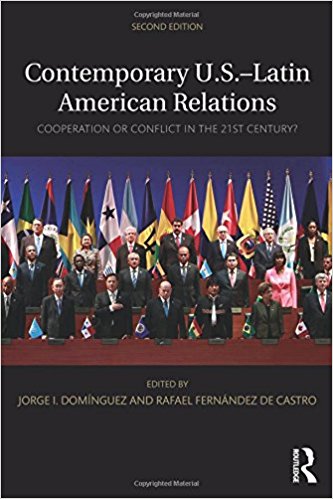 Drawing on the research and experience of fifteen internationally recognized Latin America scholars, this insightful text presents an overview of inter-American relations during the first two decades of the twenty-first century.

The second edition of Contemporary U.S.-Latin American Relations focuses on U.S. neighbors near and far —Mexico, Cuba, Argentina, Brazil, Chile, Colombia, Peru, and Venezuela. Each chapter addresses a country’s relations with the United States, and each considers themes that are unique to that country’s bilateral relations as well as those themes that are more general to the relations of Latin America as a whole. The book also features new chapters on transnational criminal violence, the Latino diasporas in the United States, and U.S.-Latin American migration.

More information about this edited volume is at Routlegde here.